TJ/Double Negative is a joint project by the photographer David Goldblatt and the writer Ivan Vladislavić, comprising a book of photographs and a novel. In TJ, Goldblatt presents 300 images drawn from more than sixty years of photographing Johannesburg and its people. Vladislavić’s novel Double Negative was written to accompany the images. Together the two volumes create a resonant conversation between image and text. 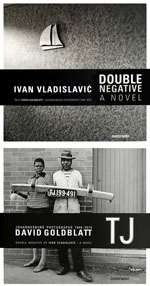 When I returned to the lounge, Auerbach had the focusing cloth over his head. For a moment, the darkness seemed to emanate from him, running out from under the stifling hood. Then the flow reversed and the cloth appeared to be soaking up the shadows that had lain there already. Mrs Ditton sat in the armchair beside the fireplace. The coffee table had been dragged away – there is no trace of it in the photograph – to expose the floorboards and a corner of the rug. Looming on the left is the largest of the cabinets, so imposing you would say it belongs in a department store. The chair has wooden arms with ledges for teacups and on each of these lies a pie-crust of crochet work and a coaster. The chair sprawls with its arms open wide and its fists clenched, and she wallows in its lap.

Auerbach shrugged off the cloth and stood beside the camera with the cable release in his hand. The shadows scuttled and settled again. He waited for something to happen. Or not happen. Something imperceptible to the rest of us had to become clear before he could release the shutter. Twice he stepped away from the camera and looked towards the door with a grimace, as if the situation pained him and he had made up his mind to leave. This caused her to look at the door enquiringly as if someone had just knocked.

I imagined the door opening, I imagined the room opening rather than the door, the door standing still while the house swung away on small hinges and closed into the eye of the camera with a bang. Patience, something is bound to happen. And if nothing does? That is unthinkable. We cannot be left here in this half-formed state.

While my thoughts were elsewhere, Auerbach took the picture. For only the second time that day, the shutter fell through the moment like a guillotine. You can see the relief on Mrs Ditton’s face as she drops from the fulness of life into a smaller, diminished immortality. She looks grateful to have the air knocked out of her. Anticipating a paper-thin future, she floats free of the fat-thighed cushions and the sticky shadows, she levitates. It is there in the photograph, you have only to look. 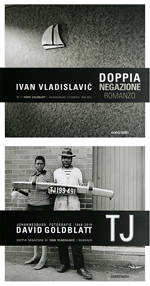 COMMENTARY
Jan Steyn on TJ/Double Negative in the Quarterly Conversation
See the article at quarterlyconversation.com